After World War II, San Antonio was known as Military City U.S.A. with five large bases and many service men and women cycling through.  The American Friends Service Committee met here from 1954 through 1957,  running workshops through its Institutes of International Relations. A few interested people held a study group for some time after these. It was reported that in 1956 the only places Quakers could hold public meetings in San Antonio were at the YMCA and YWCA (because of the loyalty oath, the ban on racially mixed groups, etc.). Texas military was also under orders not to share the platform with AFSC.  Between 1956 and 1961 periodic Meetings for Worship were held at Fort Sam Houston for non-combatants who wanted to get out of the army.

Elmer (Rusty) and Marian Carter came to San Antonio in the fall of 1966. With people who had attended the earlier worship group, The Carters began holding Meetings for Worship in their home.  Later, meetings were held in the YWCA, in the waiting room of Houston Wade, attorney, at the New Age School, the Esperanza Peace and Justice Center, and at the San Antonio College Methodist Student Center. In 1979 a serious young man in US Army uniform attended meeting. He was concerned  that San Antonio Friends did not have a meetinghouse and donated $5 to start a Building Fund.

The San Antonio Worship Group was initially under the care of the Austin Monthly Meeting, and became a Preparative Meeting in 1976. The Meeting approved an annual budget with a Building Fund, rented an additional room at the YWCA for the children, and a First Day School was begun.

Friends planned a fundraising campaign and searched for a suitable building the Meeting could buy for a meetinghouse. A Development Committee was formed. No house was found but a property on Sunset Road appeared to be a suitable site on which to build, and the Meeting bought the property in 1995.  The Meeting selected Lake/Flato Architects to design the  meetinghouse. Ted Flato studied designs of Quaker meetinghouses, consulted with members of the Meeting and designed a simple, functional meetinghouse with a meeting room, library, two children’s rooms, a kitchen, walkway, porch, toilets and storage.

The Sunset property proved unsuitable, so the meeting sold it and in 1998 bought our current property at the corner of Vandiver and Eisenhauer.  In 2000, we broke ground on what is now the wing housing the Community Room, the Children’s Room, and the Library.  We used the Community Room as a meeting room for the next few years. Our Meeting has since been able to build a meeting room, designed by Bob Harris of Lake/Flato, which provides a spacious and attractive room looking out on trees at its southern end. The rock garden and then the pergola added to the sense of quiet simplicity. 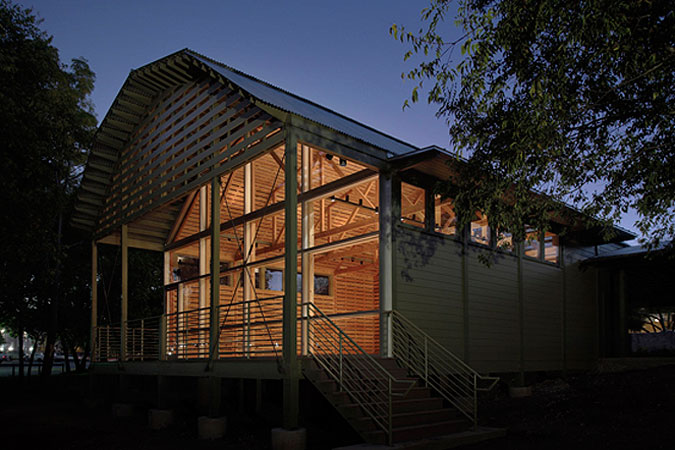