Who are the Quakers?

Quakers are members of the Religious Society of Friends, a faith that emerged as a new Christian denomination in England during a period of religious turmoil in the mid-1600’s.  It is practiced today in a variety of forms around the world, some Christian, some Universalist, some mixed. Friends Meeting of San Antonio’s members and attenders have various theological views and are open to insights from many traditions.  To members of this religion, the words “Quaker”and “Friend” mean the same thing.

Quakers are: an active, involved faith-based community living in the modern world. We are a diverse people consisting of several distinct branches. We continue our traditional testimonies of pacifism, social equality, integrity, and simplicity, which we interpret and express in a variety of ways. Today, many Friends include stewardship of our planet as one of our testimonies.

Quakers are not: Amish, Anabaptists, Shakers, or Puritans.  We come from a separate tradition than these other groups, though all originated during the Protestant Reformation and its aftermath in the 16th and 17th centuries.. Most of us don’t dress like the man on the box of oats anymore, and today we hardly ever call people “thee.”

Quakers have various forms of worship.  Many worship in silence, seeking the guidance of the Spirit.  People who are moved to speak do so briefly, out the silence, to which we then return.  These are called “unprogrammed meetings”.  Other Friends have programmed worship, with music, sermons, and typically a brief period of silence.  Friends Meeting of San Antonio meets in the unprogrammed tradition.

Quakers are one of the traditional “peace churches”, along with Mennonites, Brethren, and other groups. Since our beginnings in the 16th century, “We do utterly deny … all outward wars, and strife, and fightings with outward weapons, for any end.” (From a declaration to King Charles II of England, 1660.) 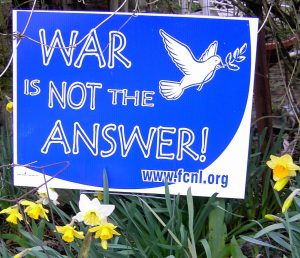 Note: This text is based on the opening text of the Quaker Information Center at the Earlham School of Religion